Geldermalsen station is to be expanded with two new platforms. As such a new tunnel under the tracks and two entrance pavilions are being added. The design of these two new additions must consider the national monument status of the station, as well as the contextual heritage and the connection of the station to its surroundings. Ever since the station was built this connection has always been difficult. Our design is a contemporary interpretation of the national monument station building; with its elongated and angled platform roof and classic interior. Inspiration was also drawn from the surrounding landscape of the area and the West-Betuwe region; it now gives the new entrances a more contextual appearance.

The two entrance pavilions are built according to the structure of the long historic platform roof and therefore have a modest design. They are, however, cleverly designed to be slanted so that they have exactly the right articulation towards the street and thus fit well into the environment. On the west side, this creates a new entrance plan that is well connected with the bus station, the parking lot and the taxi ranks. The layout of the square, the retaining walls and the green embankments are based on the landscape in the region, which is known for its fertile soil and fruit growing. The brick retaining walls pertain to the characteristic color gradient of the soil and the embankments are used as flower fields.

For the tunnel, we combined knowledge about passive surveillance with the classical features of the national monumental station building. It allows the tunnel to have a calm atmosphere, with recognisable details reminiscent of an interior. The tunnel has classic basement brickwork patterns which guide the traveler through the tunnel, above, the tunnel is lit via a rhythmic distribution of lighting and is finished with copper colored accents. Together, the entrance pavilions and the tunnel connect heritage with new elements, and the station with its surroundings. 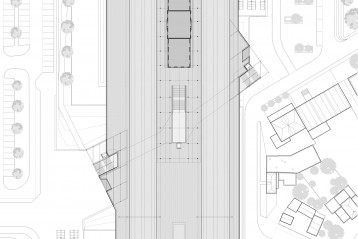 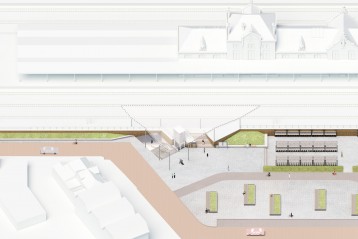 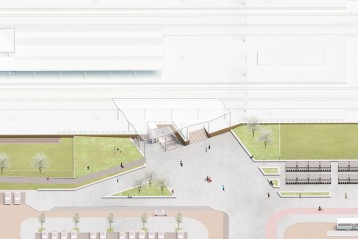 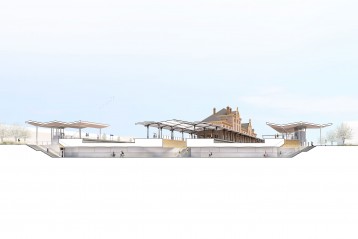